It’s been a long time coming for Lotto Rocket & his project debut “Hawaiian Hotboy” but as the saying goes, good things are worth the wait. We had the chance to attend his listening party yesterday at a recording studio in DTLA where he broke down the tracklist & shared some details in regards to the project.

Holding 13 tracks all mixed by Crook with features from Mackk & Co’s Rucci, Ride4Blackk, Bossmann, & White John. When it comes to production, of course, the one & only RoMo was included alongside Jimmy Pedigree, Mike Crook, LowTheGREAT, Mike Free, 420Tiesto, & more. 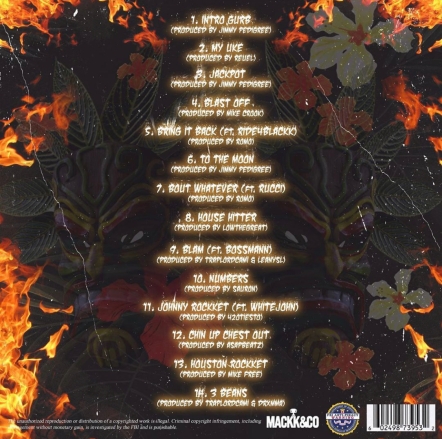 When the clock struck 8pm Lotto gathered all his guests inside the studio which was fairly big in size & packed full (as in no social distancing full) of people ready for him to hit play. He began by thanking everyone in attendance, humbly surprised that he would have so much support as he began playing “Intro Gurb.”

Fully embracing his roots from the cover art to the name of the project, “My Uke” (which is short for ukulele) is no different, as it opens with a Hawaiian activist speaking on what comes with being a Hawaiian right before the track begins. As the beat drops, Lotto comes in strong with a catchy chorus recognizing he’s the hottest out of (c)arson.

As we skip down to “To The Moon” Lotto states he was self-conscious while recording that track as it was one of the first songs he recorded sober. Since finding out about certain medical issues in regards to his lungs, he just couldn’t get it right but pushed through to finish the track. Even mixing engineer Crook stated, “[Lotto] took forever to record that one.”

Being a Hawaiian that grew up between the islands & the West Coast, Lotto’s representation for LA’s current sound has always been key throughout his career in rap. It’s one of the reasons fans love him so much, but it’s also nice to see an artist come out of their comfort zone in terms of sounds & subject matter. Which brings us to the next half of the project.

“Numbers” is a personal favorite & honestly, we’d love to see this side of Lotto more if he’s willing. During his release party, he stated that he wanted to bring something different, “I hate being put inside a box. I wanted to show everyone what else I can do when it comes to music.”
He did just that with this particular track bringing forth more tempered energy, slick lines, & a beat that honestly, we’d never think to hear Lotto on.

Throughout “Hawaiian Hotboy” Lotto uses the familiarity of his fans to his advantage. Drawing them in from the beginning with small doses of who he is over his usual sound. He delivers stories & small antidotes of his ways for all to see, then switches it up. Just when fans think they’re able to pinpoint Lotto, he gets fully vulnerable with personal experiences that he too thought were too personal, but music is a therapy for most & through it, he shares his highs & his lows. Making the project a complete production of who Lotto Rocket is from all sides. Stream & listen below!