The first GI Playlist is here! I wanted to hit you with a bit of everything from R&B-ish to rap. Obviously, some of these artists listed are a pretty big deal to be submitting their music to my little playlist.. Still, I wanted to spread the word about certain ones that I constantly keep on my radar! Hope you enjoy! 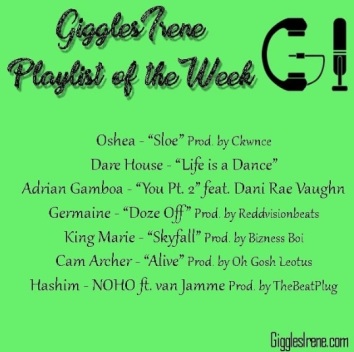 Oshea – “Sloe” (Prod. by Ckwnce)
First track is by Oshea, his name may look very familiar if you’re in touch with the site. He’s been a guest on my podcast before along with having his EP “Stop Dreamin’” reviewed here as well. He’s a dear friend of mine that just so happens to make good rap music.
–SoundCloud, Instagram & Twitter.

Dare House – “Life Is a Dance”
Dare is an artist that I’ve been keeping an eye on since about 2015. He released a project titled “WYNN” not too long ago that I had the pleasure in reviewing. Out of all the tracks on he project this is the particular one I wanted to share.
–SoundCloud, Instagram & Twitter.

Germaine – “Doze Off” (Prod. by Reddvisionbeats)
An artist that I have yet to interview or see perform, but is staying on my radar. Germaine has been pretty quiet when it comes to his music recently, but silence only means that he’s working. Each track that can be heard via his Soundcloud has a unique tone that can’t be pinpointed to one genre.
–SoundCloud & Twitter.

Adrian Gamboa – “You Pt. II”
Recently became a fan of Adrian after seeing him perform at a local event known as The Tukes Arts Expo. His energy that over took the whole crowd was phenomenal! After not being able to decide on which track to share I stuck with “You Pt. 2” since the tracks visual is to be released soon.
–SoundCloud, Instagram & Twitter.

King Marie – “Skyfall” (Prod. by Bizness boi)
Obviously King Marie didn’t submit her own music, but I wanted to share her track with y’all because.. Well, it’s my playlist. The name might sound familiar if you’ve been following me via Instagram for a while. I met King Marie back in 2014 (I believe) at an event in Los Angeles. She is truly the sweetest person & I have been a fan ever since. Get familiar with her if you aren’t already.. There have been hints that new music is on the way!
–SoundCloud, Instagram & Twitter.

Cam Archer – “Alive” (Prod. By Oh Gosh Leotus)
The Inland Empire native may sound familiar to most because after all it is a small world, having performed countless times within the past year. This is my favorite track off his latest project “Spiritgunner” which was released in September of 2017 & is available via Spotify.
–SoundCloud & Twitter.

Hashim – “NOHO” feat. van Jamme (Prod. By TheBeatPlug)
Having just released this single in December of 2017, Hashim pronounced Hah-seem is someone who does it all. From singing to producing, his track NOHO has a chill vibe that I wanted to share with everyone. Enjoy below!
–SoundCloud & Twitter.

Hope you enjoyed this weeks playlist! Be sure to check in every Friday! If you’d like a certain artist or track to be added comment below or hit me up via any of my social media accounts!

*If you didn’t make it to this weeks playlist there’s always next week.
**These playlist have NO association with any of the companies I work for.
I have NO control getting you blog placements elsewhere or radio play.
***If you haven’t already, you can submit your music here.

#GiggsMusicNews: TOMORROW I’ll be hosting @svgpreme_’s “What He Say Look” listening party! With sounds by @bennyave_!
#GiggsMusicNews: LAS VEGAS (July 29, 2021) – The Lovers & Friends Festival, presented by Live Nation, Snoop Dog and Bobby Dee, will take place at the Las Vegas Festival Grounds Saturday, May 14, 2022. As one of the world’s largest R&B and Hip Hop festivals, Lovers & Friends will treat fans to rare, blast-from-the-past performances from legendary artists including Usher, Ms. Lauryn Hill, Ciara, Ludacris, Ashanti, TLC, Trey Songz and many others!!
#GiggsMusicNews: Have you gotten your tickets for @bigsad1900 at The Roxy yet?!
#GiggsMusicNews: Catch up on a few of the latest music video releases from your favorite artists!!
#GiggsMusicNews: A handful of music from the city just dropped!
#GiggsMusicNews: Holland Izz (@iaintthesame) says he ain’t stopping until funk is on music charts!
#GiggsMusicNews: @kylebankskb is giving y’all some time to tap in & get familiar! 👀 New everything & then some COMING SOON! 🔥
We got a few vlogs edited & ready to be released!! Y’all ready? 👀
#GiggsMusicNews: A second show is being added at the Novo for @binorideaux in October! 🔥